Very simple summary
This Bounty is for a rng based mini-game in which users mine (gain) salt (credits) based on an rng command.

Not so simple example
User types [p]mine
The bot will then select a random outcome from a predefined list which comes with it’s own reward, for example:

“You struck the Salt goldmine! (30 salt)”
or
“You found a nugget of Salt! But then tripped and dropped it into the abyss below. (0 salt)”

The (X Salt) determining how many credits they have received.

Any ‘Salt’ earned will just be credits added to that users bank.

If the user attempts to use [p]mine before the cool-down has completed the bot will select a message from a predefined list. 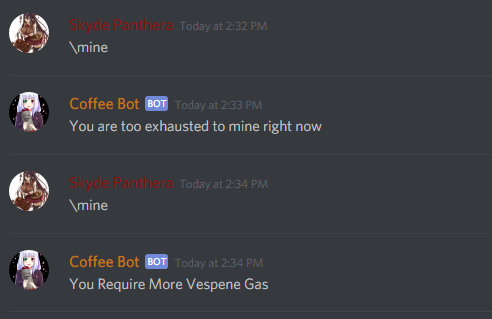 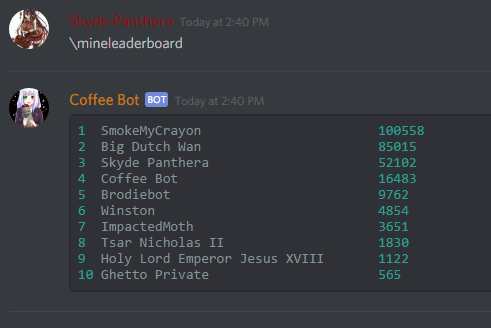 This cog will be for V3.

I see no reason for this cog not to be public unless the developer who picks up this bounty wishes it to be otherwise.

The bounty will be paid via paypal in AUD.

The “predefined lists” that I mention should be txt files or something akin to that such as a clearly designated area in the py file for editing the outcomes. 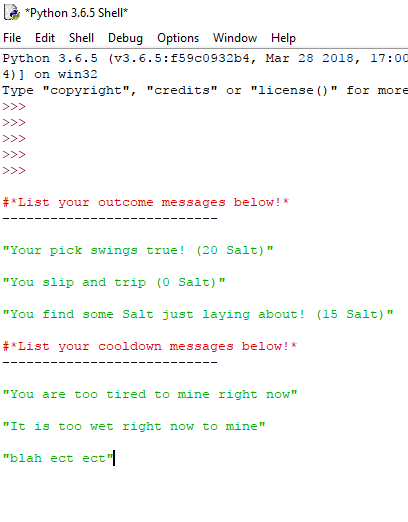 if you believe said bounty would require more funds to be accomplished this can be negotiated with me on Discord.

If you believe that the overall theme of the cog can be completed much better way please do say.

If you want more information or for me to go further into detail on something please do ask here or at preferably at Skyde Panthera#8006 on Discord.

Hit you up on discord.

This bounty has been fulfilled by UltimatePancake. A fair price was negotiated and the developer was clear and helpful throughout the development of the cog